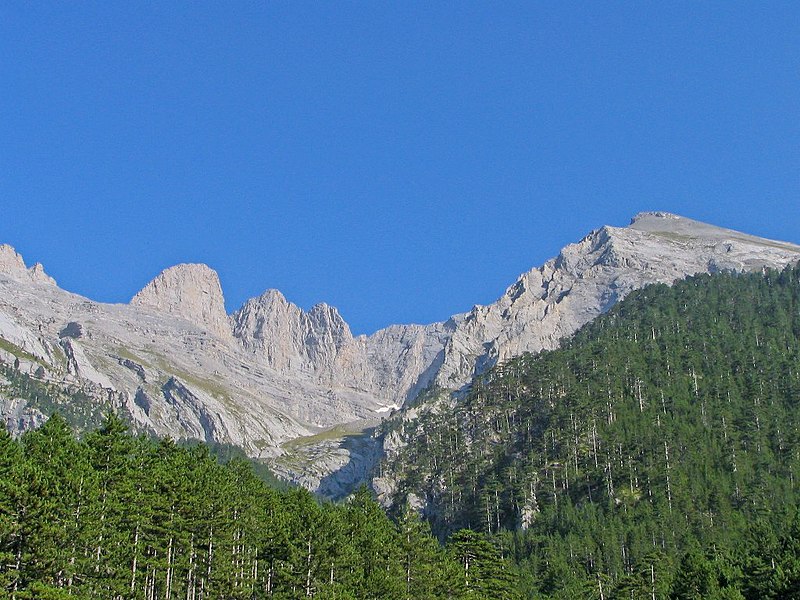 Mount Olympus (/oʊˈlɪmpəs, ə-/;[3] Greek: Όλυμπος [ˈolimbos] or [ˈolibos]; also transliterated as Olympos, and on Greek maps, Oros Olympos) is the highest mountain in Greece. It is located in the Olympus Range on the border between Thessaly and Macedonia, between the regional units of Pieria and Larissa, about 80 km (50 mi) southwest from Thessaloniki. Mount Olympus has 52 peaks, deep gorges, and exceptional biodiversity.[4] The highest peak, Mytikas, meaning "nose", rises to 2,917 metres (9,570 ft).[1] It is one of the highest peaks in Europe in terms of topographic prominence.[2] Olympus was notable in Greek mythology as the home of the Greek gods, on the Mytikas peak. Mount Olympus is also noted for its very rich flora, with several species. It has been a National Park, the first in Greece, since 1938. It is also a World's Biosphere Reserve.[1] Every year, thousands of people visit Olympus to admire its fauna and flora, tour its slopes, and reach its peaks. Organized mountain refuges and various mountaineering and climbing routes are available to visitors who want to explore it. The usual starting point is the town of Litochoro, on the eastern foothills of the mountain, 100 km from Thessaloniki, where, in the beginning of every summer, the Olympus Marathon terminates.[ wrote: