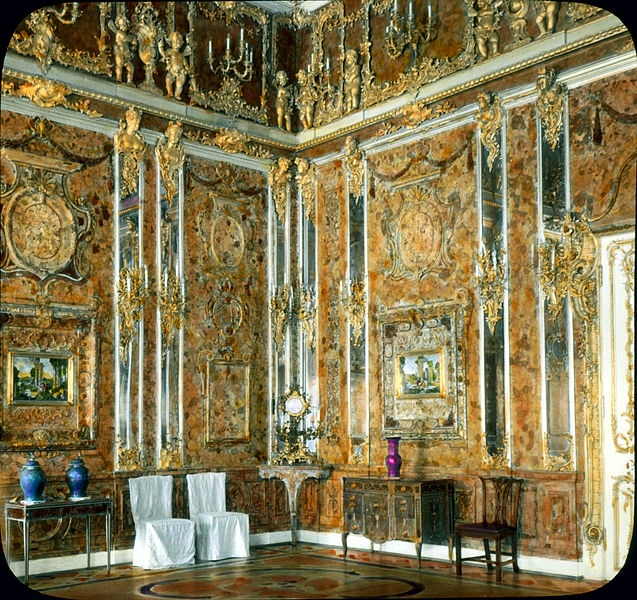 The Amber Room or Yantarnaya Komnata (Russian: Янтарная комната, German: Bernsteinzimmer, Polish: Bursztynowa komnata) is a world-famous chamber decorated in amber panels backed with gold leaf and mirrors, located in the Catherine Palace of Tsarskoye Selo near Saint Petersburg. Originally constructed in the 18th century in Prussia, the Amber Room disappeared during World War II and was recreated in 2003. Before the room was lost, it was considered an "Eighth Wonder of the World". Construction of the Amber Room first took place around 1701, in Prussia. The room was designed by German baroque sculptor Andreas Schlüter and Danish amber craftsman Gottfried Wolfram. Schlüter and Wolfram worked on the room until 1707, when work was continued by amber masters Gottfried Turau and Ernst Schacht from Danzig. The amber cabinet remained in the Berlin City Palace until 1716, when it was given by the Prussian King Frederick William I to his then ally, Tsar Peter the Great of the Russian Empire. In Russia, the room was expanded, and after several renovations, it covered more than 55 square metres (590 sq ft) and contained over 6 tonnes (13,000 lb) of amber. Catherine Palace. The Amber Room in 1917. The Amber Room was looted during World War II by the Army Group North of Nazi Germany, and brought to Königsberg for reconstruction and display. Its current whereabouts remain a mystery. In 1979, efforts were undertaken to rebuild the Amber Room at Tsarskoye Selo. In 2003, after decades of work by Russian craftsmen and donations from Germany, the reconstructed Amber Room was inaugurated at the Catherine Palace near Saint Petersburg. wrote: