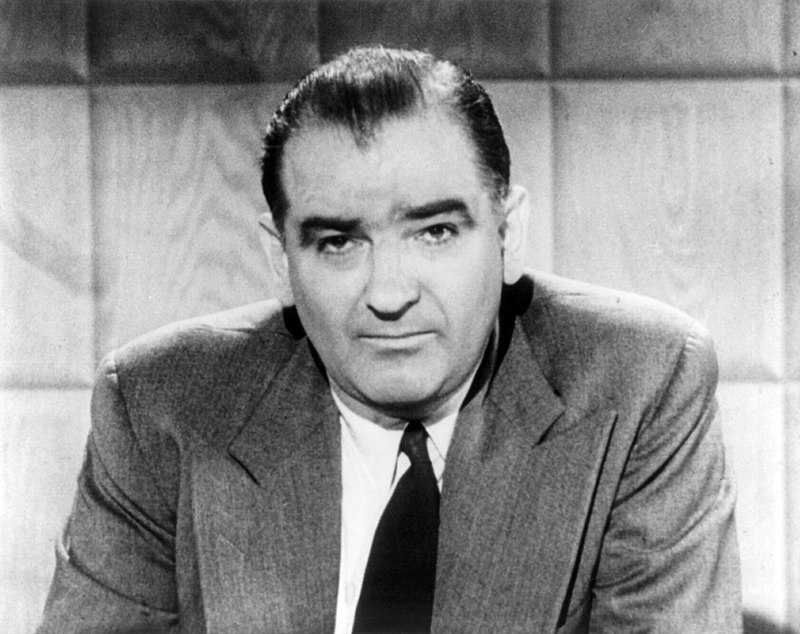 Joseph Raymond McCarthy (November 14, 1908 – May 2, 1957) was an American politician who served as U.S. Senator from the state of Wisconsin from 1947 until his death in 1957. Beginning in 1950, McCarthy became the most visible public face of a period in the United States in which Cold War tensions fueled fears of widespread Communist subversion.[1] He is known for alleging that numerous Communists and Soviet spies and sympathizers had infiltrated the United States federal government, universities, film industry, and elsewhere. Ultimately, the smear tactics he used led him to be censured by the U.S. Senate. The term "McCarthyism", coined in 1950 in reference to McCarthy's practices, was soon applied to similar anti-communist activities. Today, the term is used in reference to what are considered demagogic, reckless, and unsubstantiated accusations, as well as public attacks on the character or patriotism of political opponents.[2] Born in Grand Chute, Wisconsin, McCarthy commissioned in to the Marine Corps in 1942, where he served as an intelligence briefing officer for a dive bomber squadron. Following the end of World War II, he attained the rank of major. He volunteered to fly twelve combat missions as a gunner-observer, acquiring the nickname "Tail-Gunner Joe". Some of his claims of heroism were later shown to be exaggerated or falsified, leading many of his critics to use "Tail-Gunner Joe" as a term of mockery. McCarthy successfully ran for the U.S. Senate in 1946, defeating Robert M. La Follette Jr. After three largely undistinguished years in the Senate, McCarthy rose suddenly to national fame in February 1950 when he asserted in a speech that he had a list of "members of the Communist Party and members of a spy ring" who were employed in the State Department.[3] In succeeding years after his 1950 speech, McCarthy made additional accusations of Communist infiltration into the State Department, the administration of President Harry S. Truman, the Voice of America, and the U.S. Army. He also used various charges of communism, communist sympathies, disloyalty, or sex crimes to attack a number of politicians and other individuals inside and outside of government.[4] This included a concurrent "Lavender Scare" against suspected homosexuals (as homosexuality was prohibited by law at the time, it was also considered to increase a person's risk for blackmail). With the highly publicized Army–McCarthy hearings of 1954, and following the suicide of Wyoming Senator Lester C. Hunt that same year,[5] McCarthy's support and popularity faded. On December 2, 1954, the Senate voted to censure Senator McCarthy by a vote of 67–22, making him one of the few senators ever to be disciplined in this fashion. McCarthy died at Bethesda Naval Hospital in Bethesda, Maryland on May 2, 1957, at the age of 48. His death certificate listed the cause of death as "Hepatitis, acute, cause unknown".[6] Doctors had not previously reported him to be in critical condition.[7] Some biographers say this was caused or exacerbated by alcoholism. wrote: